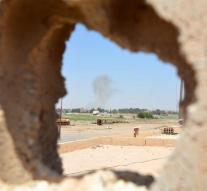 kamishli - The Turkish troop building in Northern Syria comes down to a 'war declaration'. That said the head of the Kurdish YPG militia, who warned that fighting may be possible in the coming days. 'We are not going to look passive on this potential aggression,' said YPG leader Sipan Hemo on Wednesday against Reuters.

The tension between Turkey and the Syrian Kurds has continued to increase in recent times. Both parties recently mutilated each other with artillery fire. The YPG accuses Ankara of preparing for an offensive. Turkey sees the Kurdish militia as an extension of the prohibited PKK movement, which has been fighting for decades for the Turkish state.

Turkish troops last visited Syria to support the rebels of the Free Syrian Army. Ankara sent reinforcements to areas north of Aleppo in recent weeks. The Kurds also have areas in that region. 'These Turkish preparations have reached the level of a declaration of war,' warned Hemo.