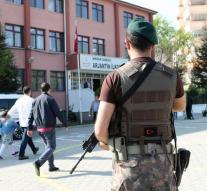 ankara - The Turkish police killed two terrorist suspects who would be members of Islamic State (IS) on an invasion of the capital of Ankara. The men between the ages of 25 and 30 were planning to commit an assault.

They were shot when they opposed their arrest, according to Anadolu State Press Sunday. In the house where they were seated the police discovered weapons and explosives. The police resigned after a tip of a third suspect previously arrested in Istanbul.