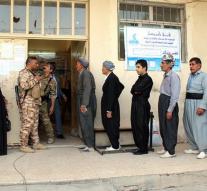 Most Iraqi Turks live in and around Kirkuk, nearly 250 kilometers north of Baghdad. Kurdish warriors took the city in 2014. Then the Iraqi troops returned there, during the march of the Sunni extremists of Islamic State.

The Kurdish regional government is holding a referendum on Monday to become independent of Iraqi Kurdistan. It is expected that the 'yes' camp can count on around 90 percent of the votes.

The Turkish government has again made clear in a series of threats these days, finding a separate Kurdish state in northern Iraq unacceptable.