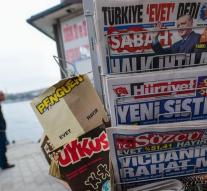 istanbul - The Public Prosecutor in Turkey has ordered the arrest of the publisher of the newspaper Sözcü. The internet editor is already in charge.

The newspaper is critical about the government of President Recep Tayyip Erdogan. With an edition of 270,000 copies, Sözcü is the second largest newspaper in Turkey. In addition to publisher Buray Akbay and chief internet Mediha Olgan are another two staff members of the newspaper target of the investigation of Turkish justice.

The Turkish state press office Anadolu reported Friday that the newspaper was suspected of committing criminal offenses in favor of the Gülen movement. The government of Erdogan sees the spiritual Fethullah Gülen, who lives in the US, as the brain behind the coup attempt last summer.

The editors of Sözcü have announced that they do not stop making the newspaper.