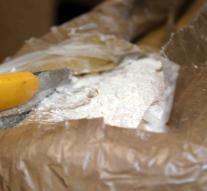 - The Turkish police made the largest cocaine catch in the history of the country. In a shipping container at the Port of Iskendrun was found in a total of almost 252 kilos of cocaine, DHA news agency reported Wednesday. The drugs are worth the equivalent of around 15 million euros.

According to the charging letter was in the shipping container a party furniture. The ship where the container was transported had built earlier in Brazil, and after a stop in Egypt walked in the port of Iskendrun. Two suspects have been arrested.