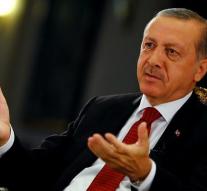 - The Turkish authorities have arrested more than 10,000 people after the coup attempt last week. The police are constantly working on picking up people.

The state news agency Anadolu reported Friday that 4060 people from the arrested persons have been officially taken into police custody. The detentions and suspensions and dismissals in government agencies and in private education have already led to international calls for restraint. The government of President Erdogan added, however Wednesday still the state of emergency for three months on the range of measures.

Most detainees are soldiers, 7423 in number. Furthermore, 287 police officers, judges and prosecutors in 2014 and 686 people were arrested.