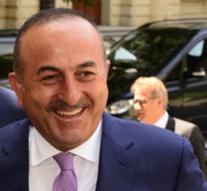 ankara - Turkey will pick a number of ambassadors from their posts in connection with the failed military coup. That said Foreign Minister Mevlut Cavusoglu Monday in an interview with Haberturk TV.

The Turkish authorities have over 60 000 soldiers, police officers, judges, teachers and civil servants arrested, suspended or dismissed since the attempted coup of July 15. Also, the authorities issued arrest warrants Monday for 42 journalists.