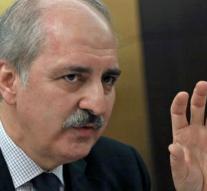 ankara - Turkey has the state of emergency in mid-July after an attempted coup proclaimed, extended by three months. This Deputy Prime Minister Numan Kurtulmus Monday announced according to Turkish media.

On 15 and 16 July elements of the armed forces tried to seize power. Loyalist troops thwarted it. In addition, more than three hundred people killed and more than 2,000 injured.

The government has passed after the coup attempt arrests of tens of thousands of people who could possibly have anything to do with the coup attempt. There are many thousands of civil servants including many members of the judiciary and education, laid off or put on a siding.