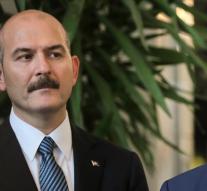 berlijn/ankara - Turkey has been mistaken for a list of German companies that would support terrorism. The list has been revoked. This was the message of Turkish Minister of Interior Süleyman Soylu Monday to his German colleague Thomas de Maizière, reported German media.

It seems like a step to relaxation between Berlin and Ankara. Last week, the German Foreign Minister Sigmar Gabriel made clear that his patience with Turkey is on. He even warned not to do business in Turkey because there is no legal certainty. Companies that are completely in good faith are being terrorized, Gabriel complained.

In May, the Turkish government sent a list to the German authorities via Interpol with the names of 681 German companies, including BASF and Daimler, who could possibly support terrorism. That list is now off the job.