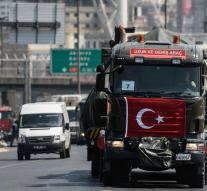 Turkey now has a total of 80 000 people from the civil service, the judiciary, law enforcement officials fired or laid off following the coup attempt. The authorities accuse them of being supporters of the Muslim cleric Fethullah Gulen residing in the US. Turkey says that he is the mastermind behind the coup.

The Government says that the followers of Gülen been spent years infiltrating institutions with the aim of overthrowing the state. The cleric, who lives in self-imposed exile since 1999 in rural Pennsylvania, denies the accusation and condemned the attempted coup.