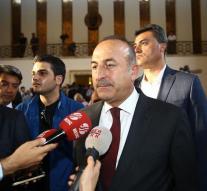 ankara - The Turkish Ministry has dozens of diplomats avenue output in connection with the failed coup of July 15th.

It reports the Turkish daily Hürriyet. Among the dismissed officials have a senior adviser to former Foreign Minister Ahmet Davutoglu and the former ambassador to Canada.

Gürcan,, Balik Babali and Tuncay are relieved of their duties '' said the current foreign minister, Mevlüt Cavusoglu on the consultant and the former ambassador.,, There is still an ambassador who we are going to remove. '' Whoever it is, would not say the minister.


Since the failed coup, tens of thousands of soldiers and officials sacked, suspended or arrested. According to the government of President Recep Tayyip Erdogan coup attempt was the work of the cleric Fethullah Gulen and his supporters.