Home / World / Turkey denies use of poison gas in Afrin 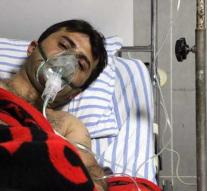 ankara - Turkey says it has never used chemical weapons in Syria. The denial follows accusations of Syrian-Kurdish troops that the country has carried out a poison gas attack in the Afrin region.

'These are unfounded accusations. Turkey has never used chemical weapons. We take great care of the citizens during Operation Olive Branch ', said a diplomat.

The poison gas attack would have caused six people to suffer suffocation.