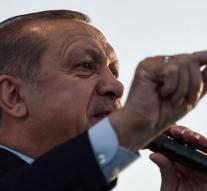 ankara - Turkey reacted angry to the US decision Wednesday to deliver weapons to the Kurdish YPG militia in Syria. The YPG responded euphorically to the 'historic' decision and said it could play a greater role in the fight against terrorism.

The US government announced on Tuesday that arms deliveries would support YPG warriors in the military operation to conquer IS Raqqa. A spokesman for the Pentagon said that the YPG, the only ground force, has the chance to take in the Syrian city in the near future.

The decision was bad in Ankara, which sees the YPG as an extension of the prohibited PKK movement. Deputy Prime Minister Nurettin Canikli said in an interview that can not be accepted that a NATO ally supports the Kurdish movement. 'Such a policy will not be a good thing,' predicted Canikli, who called on the US to conceive.