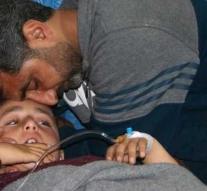 ankara - The Turkish army denies having bombed a hospital in Afrin, the main city of the Kurdish enclave of the same name in north-western Syria. 'This operation is conducted in a way that leaves civilians and innocents out of action', the Turkish army reports on Twitter.

A source at the hospital said Friday night that the only hospital in Afrin was heavily bombed by Turkey. In addition, at least 16 people were killed and dozens of others were injured. According to the Syrian Observatory for Human Rights operating from the UK, two pregnant women were killed. The death toll when bombing Afrin and its surroundings has risen to 43, according to the Observatory. The city is besieged since Monday.