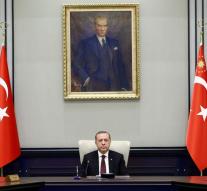 - The Turkish court has ordered the arrest of the Turkey Expert Reporters Without Borders (RSF), the president of the Turkish human rights organization TIHV and a journalist. The trio would have been guilty of terrorist propaganda, said lawyer Özcan Kilic Monday.

All three defendants have a Turkish passport. They will be prosecuted under the Turkish anti-terror legislation, which just deleted wants to abolish zi and for those visa requirements for Turkish EU.

The trio was involved in the resistance of the pro-Kurdish daily Özgür Gündem against the pressure that would be exerted on the newspaper. RSF representative Erol Önderoglu, TIHV foreman Sebnem Korur Fincanci and journalist Ahmet Aziz Nesin would have incorporated therewith a mouthpiece for Kurdish terrorists.

Özgür Gündem began on May 3, the World Press Freedom Day, a campaign against the repression that would have to endure the newspaper. Supporters arise since if the editorial board of the newspaper to keep the actual editors of the wind and support. That they now appear on prosecution, said Kilic.