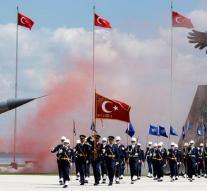 - Turkey has made great effort to replace the pilots in the air force fired after the failed coup. A call to former pilots to volunteer yielded almost no reaction, as reported officers within the army.

The big clean-up operation by Erdogan was deployed on July 15 after the coup attempt, it took about 350 pilots their jobs. The Air Force had an important role during the coup. Fighter jets and helicopters were involved in bombing of the parliament building and threatening the plane with Erdogan.

According to Turkish media are hundreds of pilots between 2010 and 2015 the army abandoned eligible to replace the dismissed soldiers. Only a handful has expressed the wish to return.