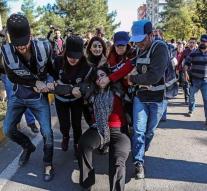 ankara - The reaction of the European countries on the arrest of pro-Kurdish politicians is unacceptable. This said, the Turkish Minister of Foreign Affairs, Mevlut Cavusoglu, Friday.

Countries of the European Union, the arrests of twelve parliamentarians of the left-wing, pro-Kurdish People's Democratic Party (HDP) strongly criticized. Among those arrested was party leader Selahattin Demirtaş.

The HDP formed in 2012 from a number of movements, because small leftist and pro-Kurdish factions wanted to try together to create an opportunity to meet the high threshold of 10 percent in elections. That worked in the second parliamentary elections in 2015. The party then dragged above expectations more than 13 percent of the vote on hold. It became the third party in the country.

The government HDP accuses of links with the terrorist PKK (Kurdistan Workers Party).