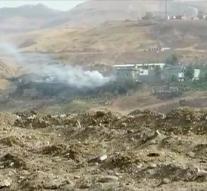 ankara - Turkey has destroyed Monday with air strikes twelve targets in northern Iraq. Ankara did not for whatever purposes it was, but it goes without saying that the bombing was directed against the Kurdish separatist PKK.

The Turkish army see in a statement that it had hit targets in the regions Metina and Hakurk. Further details were not given.