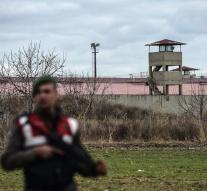 - A group of European parliamentarians on Monday admitted to the Turkish prison where opposition leader Selahattin Demirtaş is held. The MP of the pro-Kurdish HDP was arrested two weeks ago with some colleagues of involvement in 'terrorist propaganda.'

Monday proved a delegation of Socialist parliamentarians from countries including Germany, Austria, Sweden and Italy are not welcome in the prison in the northwestern city of Edirne. Delegation leader Sergei Stanishev, chairman of the Party of European Socialists, the middle decided on the way to the prison to give a press conference.

Bulgaria's former Prime Minister and EU parliamentarian asked in addition to the arrest of the Turkish MPs highlighting the 'dramatic' human rights violations in Turkey. The delegation will later in the day a solidarity visit to the editors of the Cumhuriyet, 'because of the repression under which the brave and independent journalism of the newspaper ago. '

On Tuesday the European Parliament debate on the situation in Turkey. Most major political groups have already expressed to freeze talks on Turkish accession to the EU. Although the parliament that formally does not concern a decision is seen as a strong signal. The EU Member States are divided on the issue. Government speak next month.