Home / World / Turkey battles and IS at Jarablus and Manbij 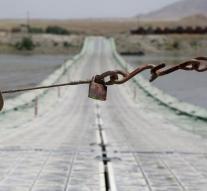 manbij - Turkey has attacked targets in Syria Islamic State and Kurdish militias. In the city Manbij was shot with artillery twenty times. An attack on targets in the city Jarablus, just across the border with Turkey, is still ongoing. The Turkish government wants to avoid taking Kurdish fighters Jarablus.

Earlier in the day said the Turkish Foreign Minister that he wants to purge the borders of the Islamic State. IS controls large areas on the Syrian side of the Turkish border.

Turkey maintains IS responsible for the 54 deaths that fell this weekend in a bomb attack at a wedding in Gaziantep.