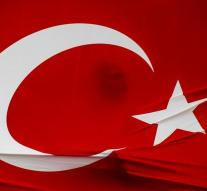 istanbul - The Turkish police arrested numerous journalists on Thursday. According to the Turkish state press office Anadolu, a total of 35 media representatives have been held. Among them is an editor of the critical newspaper Birgün.

The journalists are associated with the movement around Fethullah Gülen, the American-living spiritual who holds Ankara responsible for the failed coup last year. Ankara accuses the reporters of being a terrorist organization. They would also have used ByLock, an encrypted message app that, according to government, is in use with the Gülen network.

In the wake of the coup attempt, Turkey strongly opposes alleged Gülen fans. Tens of thousands of people have been arrested.