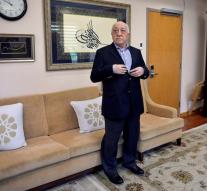 - "Turkey on Tuesday the United States formally requested the arrest of Fethullah Gulen."

"Reported that the Turkish channel NTV. The government in Ankara considers the Islamic scholar as the mastermind behind the failed coup attempt of July 15th."

"Turkish President Erdogan case recently discussed at the G20 meeting in China with his US counterpart Obama. The US President Erdogan has given on that occasion to declare that the Americans decide the case on a purely legal basis, not a political one."