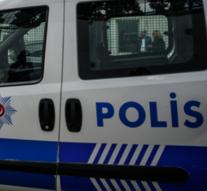 ankara - Turkish police on the night of Thursday or Friday, the two chairmen of the pro-Kurdish party HDP and arrested at least thirteen other MPs of the party. They are accused of refusing to testify about crimes linked to 'terrorist propaganda.'

The police Thursday in Diyarbakir attacked the house of Chairman Selahattin Demirtas and Ankara's house Figen Yuksekdag. According to lawyers for the HDP was ransacked the party office in Ankara and have arrested thirteen MPs. 'Runners in front of my house and want to catch me by force if necessary,' Demirtas made shortly before his arrest know via Twitter.

Turkey accuses the HDP ties with the Kurdish PKK. Which is by the Turkish government, the US and Europe as a terrorist organization. The HDP is the third largest party in the Turkish parliament with 59 of 550 seats. In Turkey, MPs enjoy immunity, but for the members of the HDP's immunity lifted in May this year.

'The HDP calls on the international community to take action against the coup regime of Erdogan,' responded the party via Twitter on the arrests and the decisions taken by President Recep Tayyip Erdogan. Turkey Rapporteur Kati Piri European Parliament expressed concern on Twitter about the developments. 'Very very bad news from Turkey,' she responded.