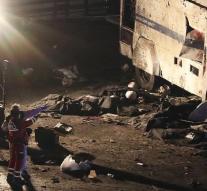 istanbul - The Turkish police arrested 44 people in the context of anti-terrorist actions. Among the detainees is a group of men suspected of having two suicide attacks last year in Istanbul, according to the city council on Thursday. As a consequence, more than forty people became involved in December 2016.

At the stadium of Besiktas football club a car bomb was exploded. A moment later a terrorist had blown up nearby. There were also 155 injured.

The police have also held a man who is responsible for an assessment last July. Then a police convocation in the province of Mardin was the target of an attack, causing eleven people to die. Forty others were injured.

The Kurdistan Freedom Falcones (TAK), a splinter group of the Prohibited Kurdish Labor Party PKK, claimed the responsibility for both attacks.