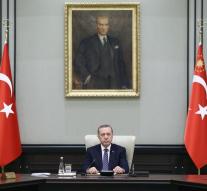 ankara - Turkey on Wednesday reacted angrily to a confidential document from the German government that the current Turkish government is described as mainstay for militant Islamic groups. The Muslim Brotherhood in Egypt and the Palestinian terrorist organization Hamas can count according to the German document supported by Ankara.

The Ministry of Foreign Affairs responded strongly in a statement:,, These allegations are a new manifestation of the distorted mentality, which for a while trying to undermine our country by attacking our president and government. ''

German broadcaster ARD spent the assessment of the German government Tuesday outside. The comments were not intended for the public, but formed a confidential response to questions from opposition party Die Linke. However, the text leaked out.