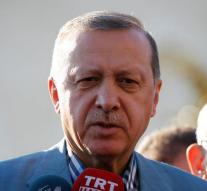 ankara - Turkish President Recep Tayyip Erdoğan finds it inappropriate that Arab countries claim the closure of a Turkish army base in Qatar. He complained Sunday, according to Turkish media, that his country is being treated as 'disrespectful'.

Closure of the Turkish base was one of the thirteen demands made by Saudi Arabia, the United Arab Emirates, Egypt and Bahrain in their diplomatic conflict with Qatar. Other requirements were less close diplomatic relations with archival rival Iran and closing of Al-Jazeera news channel.

Erdogan said, according to the newspaper, Daily Sabah, had offered to open a military base in Saudi Arabia. He would not have responded to that.

Turkey has supported Qatar in the diplomatic conflict. Erdogan reiterated his appreciation for the way in which the Qatar government in Doha addresses the demands of the evil neighbors, which, among other things, accuse Qatar of maintaining ties with terrorist organizations.