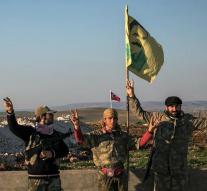 damascus - The Turkish army and militias of the Kurdish YPG in Syria have reached a cease-fire. Which reported the Kurdish news agency Firat Thursday based on 'military sources in the region.'

The truce came into being under great pressure from the US. Washington feared that Islamic State (IS) currency would beat out the discord within the armed forces fighting the terror movement.

Turkey and its allies among the rebel groups in northern Syria in recent days around Jarablus and Manbij embroiled in fierce fighting with the YPG. Turkey demanded that the YPG withdraws behind the River Euphrates and received the US, the main pillar of the Kurdish armed group, at his side. According to the Pentagon, the YPG has now largely,, '' responded to the demand, but Turkey contradicts that.