Home / World / Turkey and Russia together against terrorism 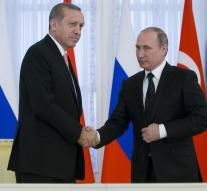 ankara - Turkey and Russia will cooperate in the fight against Islamic State and the PKK. Because the Turkish government after the failed coup last month did not get the support from Western allies and NATO, which it charged, it is normal that they,, looking for other opportunities '' to pull together in the defense, left Ankara Wednesday.

Turkish President Recep Tayyip Erdogan on Tuesday visited his Russian counterpart Vladimir Putin, with whom he exchanged unfriendly especially present in recent years to strengthen ties between their two countries. Moscow and Ankara agreed among other things to create together an investment fund and encourage the arrival of Russian tourists to Turkey. The Erdogan government swears that the rapprochement with Moscow does not compromise its commitment to NATO.

The Turkish government still expects the European Union as agreed to abolish visa requirements. But an easing of the Turkish anti-terror legislation, a condition from which the EU visa-free has set for Turks is excluded according to Ankara.


Ankara denounced Wednesday again the reaction of Western allies in the recent coup attempt. Erdogan's spokesman complained again that since then not a single Western government leader visited Turkey to express its support for the democratically elected government, an important Turkish complaint. The government puts the government action against the coup plotters in the Western press is depicted as a,, treatment ''.