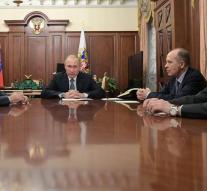 ankara - Turkish President Tayyip Erdogan on Monday with Russian President Vladimir Putin had a telephone conversation on the attack on the Russian Ambassador in Ankara. Both mention the shooting of Andrei Karlov in the Turkish capital a provocation to damage relations between the two countries.

In a video message on Turkish television, Erdogan said that the Turkish-Russian relationship is vital for the region and those who want to harm those tires will not achieve their goals.

The Russian ambassador Monday in his back was shot when he made a speech during the opening of a photo exhibition. The gunman shouted ' Aleppo Do not. ' The perpetrator was a Turkish policeman but not in service at that time.