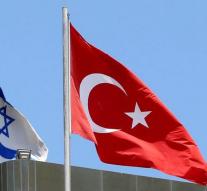 Naming the diplomats is a final step in the process of reconciliation between the two countries. Relations deteriorated in 2010 due to the attack by Israeli soldiers on the international aid convoy Freedom Flotilla. The ships were en route to the Gaza Strip with aid supplies when Israeli commandos boarded the vessels. The action ten Turks were killed.