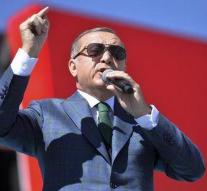 berlin - Turkey has forbidden German parliamentarians on Friday to visit NATO's military base in Turkish Konya. There are German soldiers. The appointment of next Monday has been on the agenda for some time, which Turkey had rightly given to all expectations.

According to Turkey, the visit can not continue because of the 'bilateral relations' between both NATO countries. Previously, Turkish approval seemed to provide more relaxation between Turkey and Germany.

The links between the two countries have been tense for some time now. For example, the Turkish authorities did not give permission to German parliamentarians to visit their own troops in Turkish Incirlik. Germany recovered its military personnel from the air force base. The approximately 260 men and several devices are currently being moved to Jordan.

In addition, Germany gave asylum to Turkish officers, who was against Ankara's sore leg. According to the Turkish government, the officers are members of the Gülen movement, which she said behind the failed coup last July.

The number of men in Konya is a lot smaller: around twenty to thirty German soldiers. German Chancellor Angela Merkel has to take steps to make a visit to the base possible, the Social Democrats find in the Bundestag.