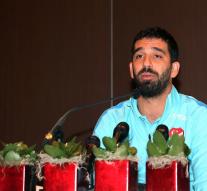 The thirty-year-old footballer, who has been international since 2002, made that decision after he became involved because he had misused himself against a Turkish journalist.

'I do the necessity and end my career at the national team. I made a mistake in the trot of the national team,' Turan said on Tuesday. The decision to quit international is a personal decision, Turan knew. Now feels 'light like a bird'.

Turan would have offended the 62-year-old reporter of the Milliyet newspaper and grabbed his neck. Earlier Tuesday, FC Barcelona's football player at his Instagram explained the incident in a different way.

'What I've done may not be good, but I thought it was worthy and honorable,' he wrote.