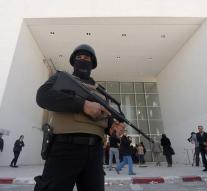 wiesbaden - The Tunisian who was arrested Wednesday in an anti-terrorist action in Germany, was a 24-hour monitored by the authorities. That constant surveillance went in after the man had to be released last year because his removal was unsuccessful.

German media draw a comparison with the perpetrator of the bloody attack on the Christmas market in Berlin in December. Anis Amri stayed in Germany since his deportation to Tunisia failed.

Wednesday caught 36-year-old man is suspected by the Tunisian judiciary of involvement in the attack on the Bardo Museum in Tunis in March 2015. During the attack by terrorists arrived 21 tourists were killed.

The 36-year-old man had been living in Germany between 2003 and 2013. In August 2015, he came back as a refugee in Germany, five months after the attack in Tunis. Since September he got stuck after he was arrested at the request of Tunisia. His extradition failed because Tunisia did not come with the proper paperwork.

In November he was therefore at large, and he was being watched.