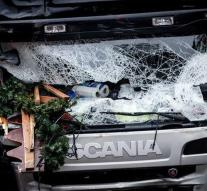 catania - The Italian authorities have deployed a Tunisian suspected of being linked to the victim of the Christmas bombing in Berlin in December 2016. The Italian Ministry of the Interior said on Saturday.

The 36-year-old man stayed in Sicilian Catania, where his compatriot Anis Amri was arrested before joining Germany in Germany last year, in the name of Islamic State, driving a truck at a Christmas market in Berlin. Twelve people were living. Amri was shot dead in Milan on 23 December.

The man who is now revealed Amri gave a phone and stayed in touch with him after leaving for Germany, explains the ministry. By listening to his device, he could eventually be caught.

According to Italian media, it would be Sayed Yacoubi, who worked on a farm in Sicily. He was caught in the collar at the beginning of May by the police in Turin, from which he wanted to leave for France illegally. Awaiting his expulsion, the Tunisian remained in a closed center.