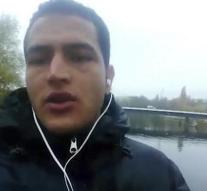 berlin - German police have arrested a possible contact of terrorist Anis Amri in Berlin. According to Der Spiegel, the suspect a forty-Tunisian. He claimed the magazine was arrested Wednesday morning at the former Tempelhof airport, where he stayed in a refugee center.

Justice has confirmed that a person is arrested in the investigation into the attack on the Christmas market in Berlin, but still wanted to release any details.

The 24-year-old Amri came from Tunisia.