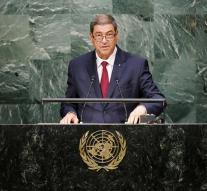 - The Prime Minister of Tunisia, Habib Essid, has a confidence motion which was filed against him did not survive. The parliament chose his resignation Saturday by a large majority. Only three MPs voted against the motion.

The two years prime minister of a coalition of four parties Essid was installed in 2015. He was under fire because too little progress has been made in the area of ​​economic reforms to create more jobs and prosperity.

After the end of 2010 in several North African countries began the Arab Spring, only Tunisia succeeded until now to launch a peaceful democratic process. Tunisian organizations were there last year for the Nobel Peace Prize.