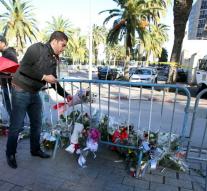 - Tunisian security forces late Sunday two suspected Islamic terrorists arrested. The two were arrested during a raid in the south of the country. Thereby include Kalashnikovs, a bomb belt, grenades, detonators and explosives to make a car bomb confiscated, reports the Tunisian Ministry of the Interior.

In Tunisia is currently subject to the state of emergency, after several bloody attacks. In an attack on a military bus in the capital Tunis arrived last week thirteen people died. In late June, 39 people were killed in an attack on a tourist beach in Sousse.