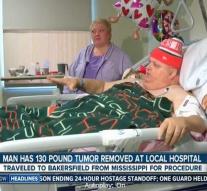 bakersfield - An American who had been told for years by doctors that he was just thick, delivered a 60-kilogram benign tumor in his abdomen.

The 57-year-old Roger Logan told from Mississippi to local media that he barely left his armchair by its size. The tumor in his abdomen was dismissed by doctors as 'just fat'. 'They said it was just fat. You're just fat, 'says Logan. 'It's like rushing three cement bags that dangle there all day. '

According to doctors, the tumor began 15 years ago with an ingrown hair and grew rapidly swelling afterwards. 'Before that I was just normal,' says Logan.

Logan eventually ended up with Dr. Vipul Dev Hospital in Bakersfield, who recognized the tumor. He removed the tumor without complications.