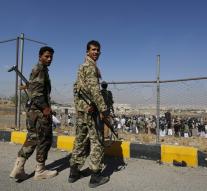 - In Yemen 's Tuesday afternoon a truce in which a nine-month war in the country temporarily put a stop. It announced the international coalition led by Saudi Arabia, which implements in Yemen air raids on Houthi rebels. The cease-fire coincides with the UN-sponsored peace talks in Switzerland.

President Abd- Rabbu Mansour Hadi of Yemen had recently made ​​a proposal for a truce of seven days in his country. If all parties adhere to the file, it will be automatically extended, Hadi wrote.

Over 6,000 people have died in the conflict between the coalition and the Iranian- allied Houthi rebels. Two previous UN attempts failed talks and accompanying ceasefires were fast. The country is in a humanitarian crisis and chaos.