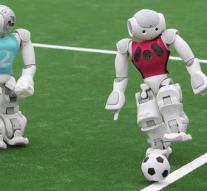 - The team Tech United TU Eindhoven Sunday has become in the German city of Leipzig world robot soccer. The Dutch soccer robots defeated in a thrilling final of the World Water from China after a decisive penalty shootout. In regular time the game had ended in 3-3.

,, Why Dutch can not take penalties? '' TU Eindhoven twittered after recapturing the world title, which was also in Dutch hands in 2012 and 2014.

China's robot team from the Technical University of Beijing showed the least adept at taking penalties. The Eindhoven robot goalie managed to stop all five attempts. The Eindhoven soccer robots then had one hit needed for the world title. Immediately after the first penalty was spot on.


The World RoboCup 2016 aims to encourage technological developments and share knowledge. Thus, the development of affordable and reliable autonomous robots can be accelerated. By using soccer as a test field for new technological inventions can be reached a wide audience by the TU Eindhoven. The ultimate goal is to develop a robot soccer team that can win in the year 2050 of the (human) world football.

Leipzig Eindhoven students were also successful with the second place in terms of care robots. In that category robots compete against each other which are used for example as a maid. Which can help ensure that seniors can remain independent longer live at home. The robotics event took 3,500 participants from forty countries participated.