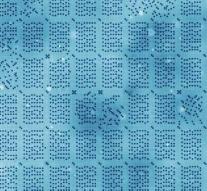 delft - A research team from the TU Delft has developed the smallest rewritable disk ever. The new storage system allows,, all the books ever written to store in an area as small as a postage stamp, '' said team leader Sander Otte.

The hard disk has according to him, only one atom per bit necessary. That is a storage capacity of 80 terabits per square centimeter. Now, tens of thousands of atoms necessary for the storage of one bit.

The scientific breakthrough,, '' according to Otte is not so much the possibility of soon five hundred times to store as much data on a hard disk, but rather in the way data is organized and stored. According to the new system can be put atoms on a large scale and automated in their place. That happened in the last thirty-five years on a small scale.,, It probably represents a breakthrough for the process of other scientific disciplines, '' suspects Otte.


The British scientific journal Nature Nanotechnology this week pays attention to the research in Delft.