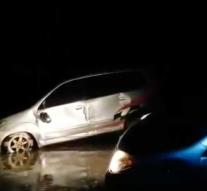 jakarta - In Indonesia, at least 20 people were killed by a tsunami that reached the beaches around the Strait of Sunda on Saturday night. According to the civil protection service are certainly...

Spokesman Sutopo Nugroho said that several buildings have suffered damage. On images you can see how people run away when a mass of water comes at them. There is also a street with cars blank. The spokesman said that the number of victims is most likely to increase.

The Sunda Strait is a strait between the Indonesian islands of Java and Sumatra. Probably the tsunami is caused by a volcanic eruption in the country.