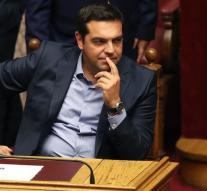 Tsipras Friday referring to statements made in a speech Thursday Erdogan in Ankara. In it, the president denounced the Turkish border arrangements laid down in the Treaty of Lausanne, a peace agreement in 1923. Erdogan said that Turkey among others islands ' had given away 'to Greece. It is according to Erdogan islands lie that water go shouting to be so close to Turkey.

The Greek Prime Minister is concerned that the statements could harm relations between the two countries. ' The questioning of the Treaty of Lausanne, where the agreements are fixed for the Greek-Turkish relations and the status quo in the Aegean Sea and its islands, is hazardous to the ties between the two countries and the region, 'Tsipras told.