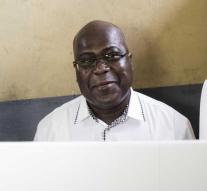 kinshasa - Opposition candidate Felix Tshisekedi has been declared the winner of the presidential elections in the Democratic Republic of Congo. This was announced by the national electoral commission of the African country.

The elections held on December 30 were chaotic. There were at least two deaths and there were reports of irregularities. According to opinion polls carried out on behalf of the Catholic Church in the country, not Tshisekedi, but businessman Martin Fayulu, received the most votes.