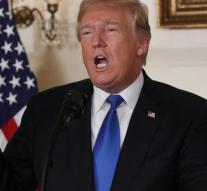 washington - America is getting stricter against Iran. To begin with, President Donald Trump will not certify the nuclear agreement with Iran. He said that Friday.

Another important step is that the Iranian Revolutionary Guard, which controls an important part of Iran's economy, is subject to sanctions.

After summarizing all the past facts, including the hostage in the American Embassy in Tehran in the 1970s and 1980s, Trump made clear that Iran's leadership in his area is still 'dangerous and aggressive' and supports international terrorism. The world needs to be tighter against the country, according to Trump.