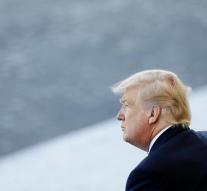 washington - The wall that US President Trump wants to put along the Mexican border does not become a wall from the Atlantic to the Pacific. Instead of parting along the 3200 kilometer long American-Mexican border, there is a wall that will be somewhere between 1100 and 1450 kilometers long. This has said Trump aboard his plane on his way to Paris, reported the White House on Friday.

Trump said there are already natural obstacles along the vast part of the border, such as 'rugged mountains and rivers, as well as completely remote areas where nobody passes through. '

It is not yet clear where Trump wants to put down his controversial wall, aimed at illegal immigration and drug criminals. The New York Times has pointed out that over a thousand kilometers of boundaries there have long been fences. In addition, there are areas of ethnic minorities and property of individuals along the border that may counteract the construction of fencing.