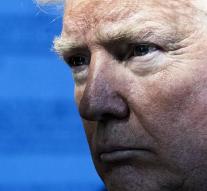 washington - A US Supreme Court has suspended the modified version of the travel ban for people from certain Muslim countries from President Trump. According to the court in Richmond, the ban is discrimination based on religion, according to American media Wednesday.

US President Trump had modified the first version of his travel ban because it was also held by another court. Trump then decided not to proceed to the supreme judge but to adjust the ban.

The case is likely to go to the supreme court of the US, the Supreme Court.