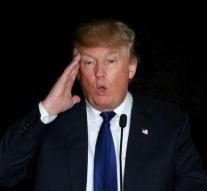 washington - The secret information that US President Donald Trump would have shared with senior Russian officials came from Israel. That reported US media based on notably US officials mentioned.

The new revelation may take care of diplomatic tensions. Israel is a faithful ally of the United States and an important source for the Americans when it comes to information from the Middle East.

The situation becomes even more complicated when Russia decides to share information with its ally Iran, Iran's largest enemy in the Middle East.

Israel does not want to confirm that the information is from the country. The Israeli ambassador in the United States reveals to the newspaper that the two countries continue to work together to fight terrorism.

The US newspaper The Washington Post reported on Monday that Trump had been a crucial source of information about the terrorist group IS by sharing delicate knowledge with the Russian Foreign Minister Lavrov and the Russian ambassador in the US at 10 May in the White House. Trump did not refer to this on Tuesday.

According to a spokesman, Trump told the Russian minister Sergei Lavrov and Ambassador Sergej Kisljak about the 'great intelligence' at his disposal. 'I have people who provide me with great intelligence every day,' he said, according to an official transcript. Kisljak is a key figure in the ongoing controversy about possible Russian interference with the US elections.

Trump himself admitted Tuesday that he shared secret information with the Russians. He did this on his own from a humanitarian point of view. 'As president, I wanted to share facts regarding terrorism and aviation security. That's right, 'Trump tweaks. Trump also says to help the Russians fight against IS.

READ ALSO: 'Trump did not know resources at all'

However, according to the National Security Advisor McMaster, the President did not say anything wrong. According to him, Trump was not aware of the sources he would have revealed.