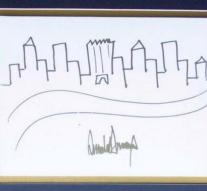 washington - Over taste can be disputed, but a 'work of art' by US President Donald Trump has to spend at least $ 9000 at an auction.

The somewhat simplified view of Manhattan's famous skyline (New York) was signed by Trump in 2005 during a charity event. Together with senator John McCain, actor Ben Affleck and actor Charlize Theron, Trump should let his creativity go free. The drawings were previously auctioned via eBay, but now again under the hammer at Nate D. Sanders Auctions.

Trump made the scene with a golden pen. The building in the middle should represent the well-known Trump Tower. According to the auction house, the work is 'in excellent condition' and it is a rarity that a later president's work will come under the hammer.