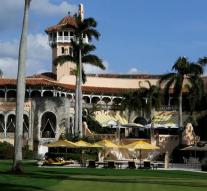 palm beach - The Trump Country Club and Golf Club, Mar-a-Lago on the East Coast of Florida, must be evacuated because of Hurricane Irma. Trumps Outside, where he likes to live often, is located in a Palm Beach area that is labeled by the authorities as dangerous to life. In Palm Beach, about 100 kilometers north of Miami, about 125,000 people are required to leave in safer places inland on Friday.

In southern Florida hundreds of thousands of people are evacuated. In computer predictions of the course of the devastating hurricane Irma, that Sunday afternoon seemed to land near Trumps home on Sunday afternoon. But according to the latest estimates of the American Hurricane Center (NHC), Irma reaches the coast on the landmark called the 'Keys' on Sunday morning, further south.

Irma then moves along the densely populated southeast coast of Florida further north. Around 175 kilometers of low coast, more than 6 million people live in Miami and Palm Beach, among others. However, the rate is unpredictable. In the last forecasts, Friday morning, Irma's route is westward. The storm would then hit a very sparsely populated area.